"Computing myself and the world around me has been the primary focus of my work. Being able to interpret themes through circuit boards and data gives me the same feeling a painter would get, stroking a brush through the canvas, only the canvas is a screen, and the brush is code.

I am always looking to create work with an agency. That includes the public and machines cooperating seamlessly, one learning from the other. Here lies the core of my practice as I cannot help but interpret the world with posthumanist eyes.

I will never focus on just one theme as my goal is to strike with visual boldness and use interactivity to discuss issues important to me, ranging from sexuality to political corruption. What keeps me inspired is my Latino heritage and that by using an intangible medium, magic is possible." - Alesandra Miro
Congressional Scandal Generator Installation - The Daily Corrupter
Alesandra considers herself as a digital artist that uses data, software, and code as her medium. Currently, she explores the use of technology to create disobedient objects that challenge the way we see and interact with information. Identifying as female and Latina (Peruvian) she explores many provocative and taboo themes such as sexuality, corruption in the government, and the deadly patriarchy that surrounds women and young girls in all of Peru and Latin America. 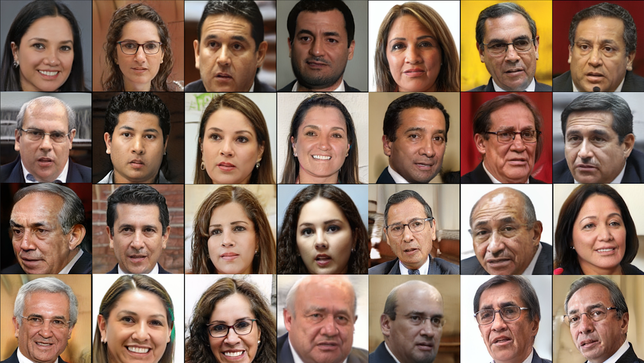 Latin American politics has had a long history of tragic dictatorships, civil wars, and political coups. Venezuela has been suffering from failed military governments for more than a decade, the Argentinian peso has lost 67% of its value since 2020 and the current Brazilian president is a conservative, ultra-right military man who has made headlines for anti-abortion stances, sexist, racist, and homophobic comments.

This project aims to use humour and political commentary to create a disobedient installation that uses Machine Learning to train and create synthetic scandals based on news data from real congressional scandals in Peru as well as congresspeople images to go alongside them.
​
This disobedient installation consists of two main components: Machine Learning for the generation of visual and text data, and user interaction for the triggering of this data, aka the scandals. Before Alesandra started to train in any NNs, she needed to contain her data as much as she could, to allow the best training possible. She set herself a series of rules: First, to only take information from the main Peruvian newspapers, magazines, and radio sites (social media articles and any other written news on the internet was out of bounds) Second, the data should only belong to the period from 2000 to 2020. Alesandra was also careful to record the sites she visited on Zotero, to be able to trace back the articles if needed.
Alesandra Miro decided to use Runwayml for the Machine Learning process because of its quick prototyping power, user-friendly interface, and its freedom to allow OSC, HTTP, and Java communication. For the text generation, she used openai's GPT-2 generative text model. 'GPT-2 is a large transformer-based language model with 1.5 billion parameters, trained on a dataset of 8 million web pages. GPT-2 is trained with a simple objective: predict the next word, given all of the previous words within some text' (openai, 2019). In this case, it was going to predict congressional scandals. For the image generation, Alesandra used Nvidia's StyleGan-2 generative image model. Another large pre-trained model which uses the deep learning method of Generative Adversarial Network. In short, GANs can learn the specific pixel pattern of almost anything, provided you have enough images of it for it to train. In this case, it was corrupt congresspeople, and she had more than enough.
Congressional Scandal Generator Installation - Close up
Having worked as Creative Technologist for Interactive Agency Happy Finish, Alesandra has pitched, prototyped, and worked on projects for the BBC, The Telegraph, Royal Academy, The Shard, Dimensions Volumetric Capture, Microsoft, and others.

In parallel Alesandra works under the name badgrandpa creating rambunctious and fun 3D content in both Render and Realtime pipelines. Recently graduating from MA Computational Arts at Goldsmiths her practice has shifted towards interactive programming, researching provocative themes such as the illegality of abortion, outdated government policy, and the prevalent machismo culture, native to her hometown of Lima, Peru.

If you are interested in purchasing this work, click here
A snippet of Alesandra explaining the coding process behind her shortlisted piece