"My practice is multi disciplinary and uses different modes of making and exhibiting. I primarily work with textile interventions, film projections, painting and soundscapes. I am very interested in the relationship between images and objects and their material histories. The textiles I work with are a combination of found objects and fabricated ones. My use of turmeric and saffron as pigments are a nod to the east India company’s extraction from the subcontinent. It also references a sense of othering - as well as erasure.

Over the past year I have been invested in exploring the relationship between the digital and physical - pushing my otherwise tactile work into screen based media. This has allowed to explore the historic connections between textile making and computer graphics." - Maryam Hasnain

Close up of "Fun Fact: Ottomon Empire & Nintendo Existed at the same time" (2020), Oil Sticks on Kilim rug & Projection
Maryam Hina Hasnain was born and raised in Karachi, Pakistan. She studied Fine Art first in Kuala Lumpur, and then in London, and currently holds a BA in Fine Art from Goldsmiths, University of London and an MA (Distinction) in Fine Art from Chelsea College, University of Arts London.

Hasnain's practice is underpinned by an interest in trade, empire, migration, borders and citizenship. These themes are explored through a variety of mediums: primarily, paintings, soundscapes, installations and textile interventions. Her studio practice extends into the realm of research, curation and collaborative practice. She is an active, founding member of 2 artist collectives: Neulinge (est. 2019) & Forum Collective (est. 2020), and has previously exhibited with Artlicks Weekend, London Grads Now at the Saatchi Gallery and the South Asia Institute Chicago. Hasnain most recently co-curated a project for "Late at Tate Britain x Chelsea College'' titled "Constructing Landscapes/ Building Worlds'', where she also participated as an artist. Her work was recently acquired for University Arts Londons’ permanent collection - and in 2021, she was awarded the UC Berkeley South Asia Artist Prize for the year.
Artists Statement: This piece is part of an ongoing interview film series which revisits the artist statement as a subversive construction of reality - through the lens of criticality and humour. 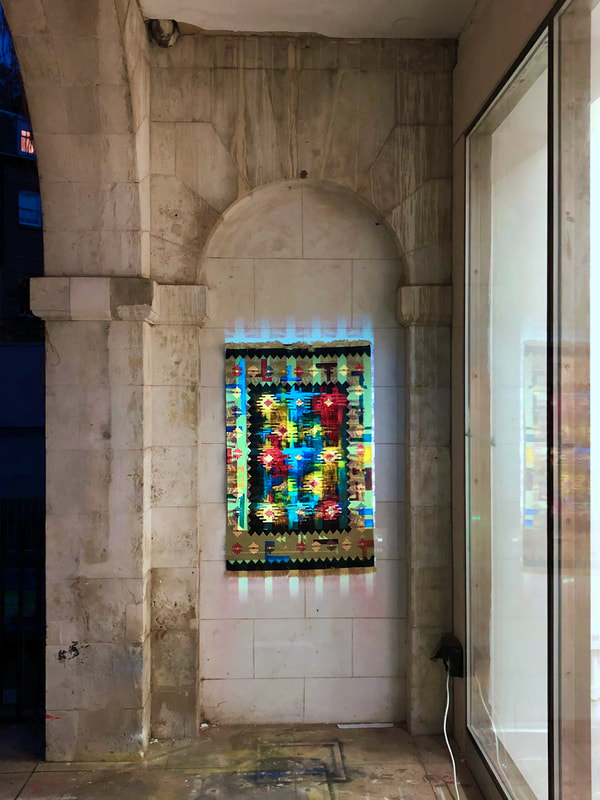 "Fun Fact: The Ottoman Empire And Nintendo Existed At The Same Time" is a textile intervention and mixed media film work that explore the linkages between physical and digital. Film projections onto the textile activate objects burdened by histories of empire and trade.

This past year has pushed Maryam's very material based practice into a new territory. She thinks about textiles as objects, heavy with notions of domesticity and trade but above all as an elusive cultural signifier. The images and visuals coded in them reminds her of a very specific early internet aesthetic - flat weaves look like block edged polygons. The projections activate the rug, creating an illusion of a portal - blurring the idea of physical and digital space. Maryam's intervention on the existing textile with oil sticks looks to use the painterly language of mark making extending these shapes and forms.

"Through installations and assemblages of textiles, as well as digital video pieces, Maryam Hasnain conducts material investigations of transnational and cross-cultural exchange and the paradoxes of provenance and origin sources. In considering how particular craft forms, such as textiles, can be reconceived and understood in a media-saturated landscape, Hasnain reroutes the circuits of disposability and invisibility that craft traditions are so often relegated to. Drawing on the histories of the textile trade and her own experiences working and living across South and Southeast Asia and London, Hasnain considers the politics and presentation of artistic labor, often applying reflexive self-critique to her own position as an artist." - Tausif Noor, Curator.

Economy of movement 2 is a more recent mixed media work that results in a short film. It was initially at Tate Britain lates online under a project titled constructing landscapes/ building worlds and is currently part of the South Asia institute in Chicago online exhibition - diasporic rhizome.

Maryam's use of turmeric is s a nod to the east India company’s extraction from the subcontinent. It also references a sense of othering - as well as erasure. Anyone that has previously cooked with turmeric knows that it is a resilient pigment.

Images created by that dying and staining process are then projected on this site. Where they create the illusion of a portal through a fleeting projected image.

The same image when animated becomes palimpsest character charting movements of migration and trade.
When projected onto a Georgian building in London it becomes the ultimate orientalist trope - the magic carpet.
​
The films exists digitally but relies heavily on physical materials.